In July of 1965, after many hours of research and study concerning the need for a re-socialization program, a letter of recommendation was submitted to the Executive Committee of the Lebanon County Mental Health Association by the Acting Re-Socialization Committee, chaired by Reverend Walter Hales. This study took place under the leadership of Mrs. Edith Krohn, President. The letter convinced the Board of the need for a re-socialization program; goals were established, plans were made to find a part-time director, and a meeting took place. Invitations were sent to former consumers living in Lebanon County.

By March of 1966, the name Halcyon Club was selected for the re-socialization program. Halcyon was selected because the meaning of the word “Halcyon” is peace, contentment, and calm following the storm. The first meetings were held in the basement of the Salem Lutheran Church. In a year’s time, membership grew from 19 to 90 members! Because of this, larger quarters had to be found, and one year after its founding, Halcyon moved to 22 South 8th Street, on the 2nd floor of Martin Miller’s Sporting Good store. 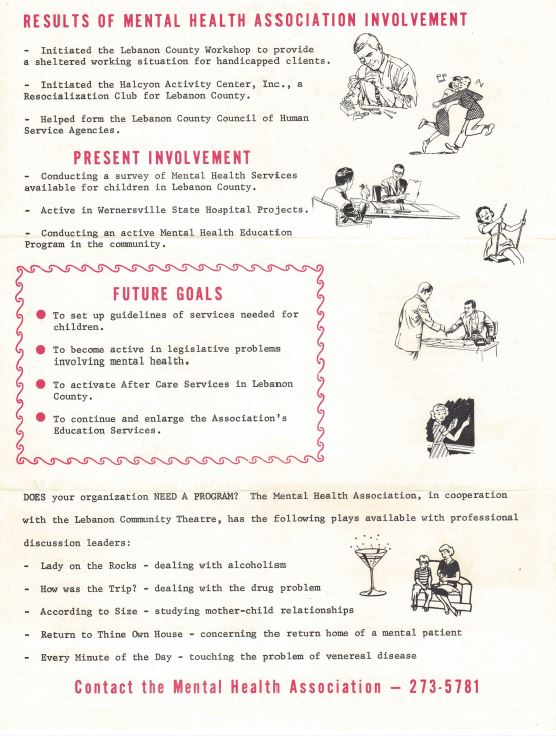 By 1968, Halcyon had 44 volunteers and 135 members participating in structured and unstructured programs. During this time, Margaret Miller was hired as the Assistant to the Director. 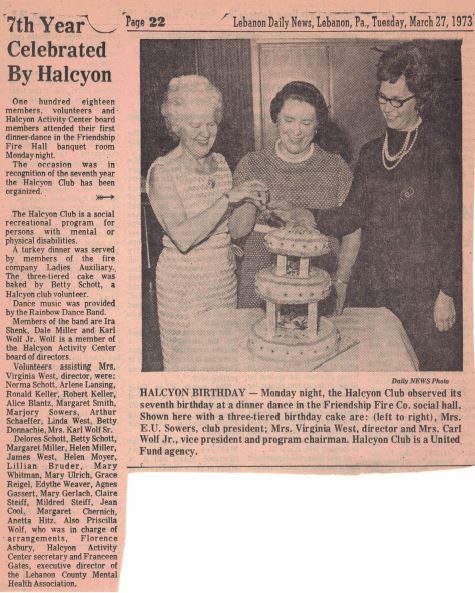 Halcyon’s programming expanded to include activities such as bingo, cooking, and knitting, Volunteer Recognition night, bus trips, and dances. In 1976, a hot meal program was instituted for club members and a part time cook was hired. The Halcyon Chorus was formed under the direction of Mildred Bragg; members were able to perform at local churches and community events.

In January of 1977, Halcyon moved to its new quarters at 39 South 8th Street. Between 1977 and 1978, Halcyon’s membership grew to 250 members and 45 volunteers. Halcyon had a number of services club and churches involved in providing programs and refreshments for the members.